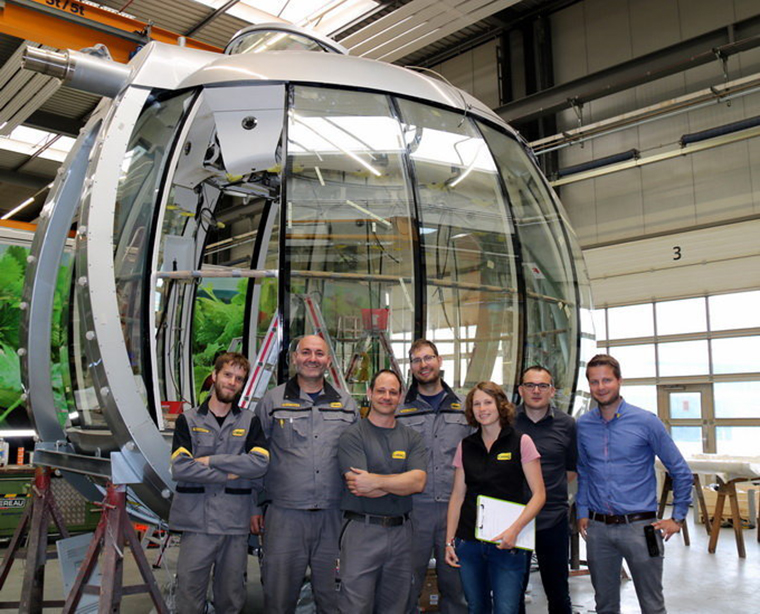 A floating "Polarstern" in the cruise ship sky

Only since the beginning of April 2018 has Calag Carrosserie Langenthal AG been acting as a new, neutral manufacturer in cable car construction, and the Swiss family business can already demonstrate its expertise with the two spectacular North Star cabins. They are modelled on the Polar Star and are being produced for two cruise ships on behalf of Bartholet Maschinenbau AG.

The elliptical cabin symbolises the Polar Star and has been the attraction on three cruise ships of the Quantum series, which the German Meyer shipyard has produced for the US-American-Norwegian shipping company Royal Caribbean International based in Miami, since 2014. These cruise liners offer space for up to 4,200 passengers, usually have 18 decks and were designed for a young audience. For this reason, special emphasis was placed on entertainment. One of the highlights is the North Star cabin, which can be lifted by crane on the top deck of the ship and swung out over the sea at a height of up to 50 m above the deck, so that the passengers can then float about 90 m above the water surface. The maiden voyage of the Quantum of the Seas was in late October 2014.

The two sister ships Anthem of the Seas and Ovation of the Seas followed in spring 2015 and early 2016 respectively. Due to the very positive passenger response to the North Star, Gangloff Cabins AG, a company of the BMF Group AG, ordered two more North Star for the fourth (Spectrum of the Seas) and the fifth cruise ship (name yet unknown) of the Quantum series. Completion of the two cruise ships is scheduled for 2019 and autumn 2020 respectively. The sensational cabins are currently being manufactured on a contract basis in the production halls of Calag Carrosserie Langenthal AG (Calag).

The Swiss family-owned company took over the special cabins production of Gangloff Cabins AG in spring 2018 and since then has been acting as a new manufacturer of reversible and special cabins and funicular cars. This part of Gangloff complements the Calag product range. Member of the management board Michael Späti (Head of Marketing & Sales) emphasises: “With around 160 employees today, Calag is one of the larger suppliers in the vehicle construction and bodywork industry with its new headquarters in Langenthal (usable floor space: 12,610 m²), which was built in 2012, and its service centre in Oensingen. With the craft divisions vehicle construction, cabin construction, bodywork, repair and service, painting and lettering, we can cover all needs from planning to the finished aerial tramway and special cabins as well as the funicular car from one source. The production of the two North Star cabins, which we are currently producing for Bartholet Maschinenbau AG as a contract manufacturer, is proof of our expertise”.

And board member Marc Pfister adds: “This is a very good start in cable car construction for Calag. In addition to the versatile, comprehensive expertise that the company covers through its business units, it also has specialists who have already worked on the production of the North Star in the past”. 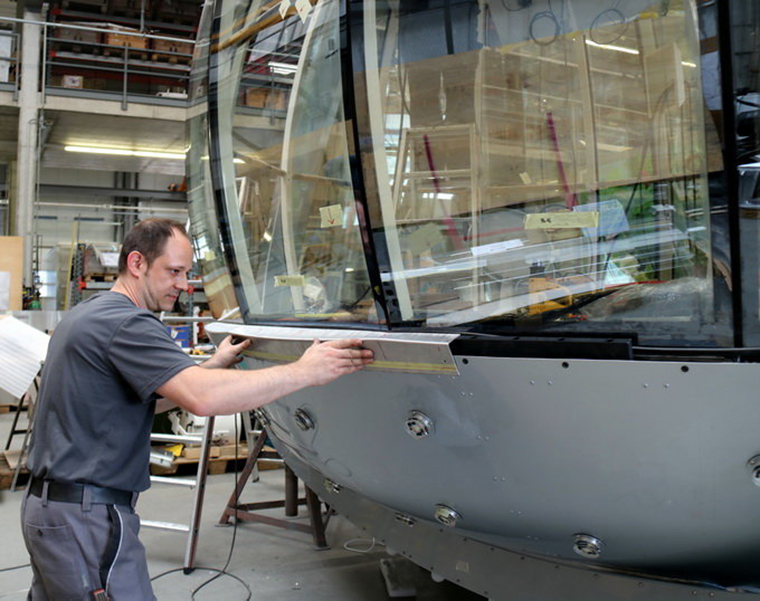 © ISR, Real manual work is required in the production of the North Star: employee Andreas Burri adapts the sheet metal to the cabin shape with millimetre precision.

The North Star convinces with its simple elegance and sophisticated design. Basically, the material properties of the cabin had to be tailored to the specific requirements of use at sea. Management Board member Thomas Hügli (Head of Vehicle Construction) says: “The construction made of stainless, seawater-resistant steel V4A is completely welded. Welding the chromium steel was a challenge for our employees, which we mastered – not least because of our versatile know-how”. The all-round glazing of the cabin has been pulled down to the floor. Board member Marc Pfister informs: “We have installed ‘climate control panels’ here. One knows this special glazing from the latest generation of passenger cars. This laminated glass is provided with a heat-absorbing coating that protects against solar radiation and at the same time can be electrically heated in winter”. The North Star cabin was designed for 15 + 1 persons in such a spacious way that there would actually be room for considerably more people. The cabin weighs 4.2 t, is 4.5 m long, 3.7 m wide and 3.5 m high. Boarding on the cruise ship takes place on the 18th deck from a platform on the glass roof of the bar below. The outer skin is finished in silver. The interior is dominated by a light colour scheme, except for the blue floor covering of non-slip rubber nubs. Generous roof glazing ensures an unobstructed view of the starry sky. Apart from two permanently mounted white racing boat bucket seats, kidney-shaped benches made of white leather are provided as seating, which can be inserted or removed using a quick-change system.

Particular importance was attached to the cabin lighting. Says Pfister: “Four large spotlights are installed in the floor area and shine downwards. On the cabin roof, in turn, a huge spotlight shines into the sky to further emphasise the ‘Polarstern effect’. The floor panelling itself houses around 120 LED lamps, which provide a play of colours. LEDs have also been integrated into the enclosure profiles, and the interior lighting of the cabin is also special. All these features make for an impressive light show”. A comprehensive multimedia package with loudspeaker and video systems was also installed. The car attendant operates the crane system, but also acts as an entertainer and information person. An emergency button is also installed in the cabin. When it is pressed, the crane programme returns the cabin to its initial position. The entire installation is monitored from the ship’s bridge. The crane programme can also be enabled or stopped from there. The first North Star cabin for the new cruise liner Spectrum of the Seas of the shipping company Royal Caribbean International was already delivered this year in July. At the same time, production of the second North Star for the fifth cruise ship of the Quantum series, which is expected to be completed in autumn 2020, also began. “This project is a successful premiere for us in the production of special cabins,” says management board member Michael Späti. Finally, he also referred to the extensive Gangloff archive, which is now housed at Calag’s headquarters in Langenthal. In future, Calag will also be responsible for customer service as well as conversions and revisions of existing Gangloff systems.